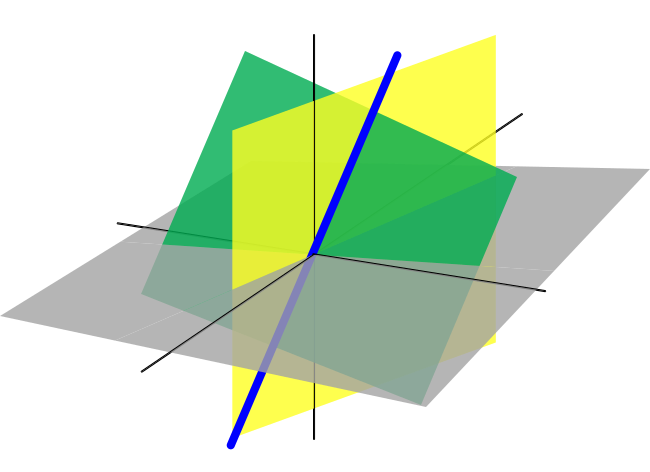 Vector mathematics are used in physics all of the time. Consider the picture at the beginning of this notebook. While the space shuttle is attached to the Airplane they have the same velocity vector. This vector likely has three components; the velocity in the x direction, y direction and z direction. In fact this velocity is just a combination of multiple components such as thrust from the engines, wind speed and drag.

In this notebook we will be discussing basic vector mathematics and practicing our Python. We will be using the commands in this notebook all semester so make sure you have have some mastery before moving on.

Suppose that we have three objects on a balanced beam. Also suppose we know that one has a mass of 2 kg, and we want to find the two unknown masses. Experimentation with a (assume weightless) meter stick produces these two balances. (diagram not to scale) 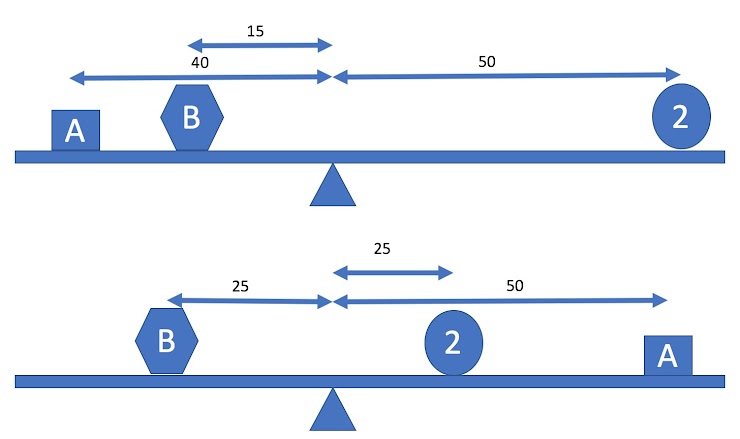 ✅ Do This: Find a solution for the above systems of equations and place your solution in the following cell. Make sure you delete the instructional text in the cell first.

✅ Do This: Using Python as a calculator, verify that the solution you have found is correct.

✅ Do This: Now lets consider a system where we have three unknown masses instead of two. Experimentation with a meter stick produces the two balanced states shown below (diagram not to scale). Write the equations for this system. 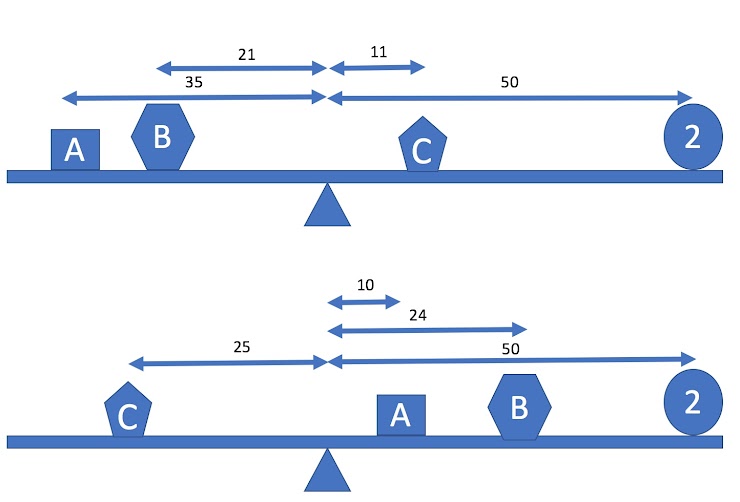 Put your answer to the above question here

✅ Do This: Find a solution to the second set of equations and report the mass for objects A, B and C.

✅ Do This: Using Python as a calculator, verify that the solution you have found is correct.

For any vectors x, y, and z of the same size/dimension, we have the following properties:

For any vectors x, y, and scalars a, b, we have the following properties

For those who are new to Python, there are many common mistakes happen in this course. Try to fix the following codes.

It means that the code does not make sense in Python. We would like to define a vector with four numbers.

✅ DO THIS: Fix the following code to create three vectors with four numbers.

Although you may have been able to get rid of the error messages the answer to you problem may still not be correct. Throughout the semester we will be using a python program called answercheck to allow you to check some of your answers. This program doesn’t tell you the right answer but it is intended to be used as a way to get immediate feedback and accelerate learning.

✅ DO THIS: First we will need to download answercheck.py to your current working directory. You only really need to do this once. However, if you delete this file by mistake sometime during the semester, you can come back to this notebook and download it again by running the following cell:

✅ DO THIS: How just run the following command to see if you got x, y and z correct when you fixed the code above.

NOTE make sure you do not change the checkanswer commands. The long string with numbers and letters is the secret code that encodes the true answer. This code is also called the HASH. Feel free to look at the answercheck.py code and see if you can figure out how it works?

Numpy is a common way to represent vectors, and you are suggested to use numpy unless otherwise specified. The benefit of numpy is that it can perform the linear algebra operations listed in the previous section.

For example, the following code uses numpy.array to define a vector of four elements.

In mathematics, 1-vector is considered as a scalar. But in Python, they are not the same.

✅ DO THIS: Modify the print statement using indexing to only print the value 3 from the list_of_vectors defined below.

✅ DO THIS: The following code tries to get the third element of x_np, which is the number 2.0. Fix this code to provide the correct answer.

There is a special index -1, which represents the last element in an array. There are several ways to get more than one consecutive elements.

Take a look at the following code.

This looks weired and may not make sense for those uses other languages such as MATLAB.

✅ DO THIS: There is a method named copy that can be used to create a new array. You can search how it works and fix the code below. If this is done correctly the x_np vector should stay the same and the y_np you now be [-1 0 2 3.1].

Vector equality in numpy and list¶

Zero vectors and Ones vectors in numpy¶

In this section, you will understand why we use numpy for linear algebra opeartions. If x and y are numpy arrays of the same size, we can have x + y and x-y for their addition and subtraction, respectively.

For comparison, we also put the addition of two lists below. Recall from the pre-class assignment, we have to define a function to add two lists for linear algebra.

✅ DO THIS: Modify the following code to properly add and subtract the two lists. HINT it is perfectly okay NOT to write your own function try you should be able to cast the lists as arrays:

A scalar-vector addition means that the scalar (or a 1-vector) is added to all elements of the vector.

✅ DO THIS: Add a scalar 20.20 to all elements of the following vector x_np and store teh result back into x_np

When a is a scalar and x is numpy array. We can express the scalar-vector multiplication as a*x or x*a.

We can also do scalar-vector division for x/a or a/x. (note that x/a and a/x are different)

✅ DO THIS: Divide all elements of the following vector x_np by 20.20 and put it into y_np

As stated above relational operations on numpy arrays are performed element-wise. Examples we mentioned before are

Note for this to work the two vectors have to be the same dimensions.

In the following example, we are given two vectors (x_np and y_np), and two scalars (alpha and beta), we obtain the linear combination alpha*x_np + beta*y_np.

We can also define a function lincomb to performn the linear combination.

✅ DO THIS: Finish the following code for lincomb and compare the results we just get.

We can also test the functions ourselves by using values for which we know the answer. For example, the following tests are multiplying and adding by zero we know what these answers should be and can check them.

If you want to check that all values in a numpy.array are the same you could convert it to a list or there is a method called alltrue which checks if everything is true. It is a good idea to use this method if vectors get big.

This work is licensed under a Creative Commons Attribution-NonCommercial 4.0 International License.